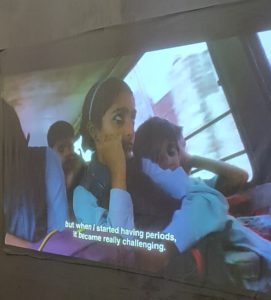 The maiden screenings were held on 8th March with the celebrations of International Women’s Day 2021 with Samvedna Connecting Souls. We started the day with an intense dance performance by young Neena Saxena setting the right energy levels for the day. It was followed by fun but transforming “Self-Empowering Workshop” conducted by our dear friend Agua.

We are grateful to her for a heartwarming workshop. Post-workshop we screened two special movies on the theme of the day. Period. End of Sentence. is a 2018 documentary short film directed by Rayka Zehtabchi about Indian women leading a quiet sexual revolution. The documentary short follows a group of local women in Hapur, India, as they learn how to operate a machine that makes low-cost, biodegradable sanitary pads, which they sell to other women at affordable prices. This not only helps to improve feminine hygiene by providing access to basic products but also supports and empowers the women to shed the taboos in India surrounding menstruation – all while contributing to the economic future of their community. The film is inspired by the life of Arunachalam Muruganantham, a social activist from Tamil Nadu, India. Ladies First is a 2017 Indian documentary on the life of archer, Deepika Kumari. Directed by Uraaz Bahl and Shaana Levy Bahl, it chronicles her journey through living in poverty in Jharkhand, to later getting enrolled in the Tata Archery Academy and representing the country at several international tournaments.

It was shot before the 2016 Summer Olympics over three years. Ladies First was released on 8 March 2018 on the eve of International Women’s Day on Netflix.

We were graced by the presence of Dr. Neetu Singh, an Ayurvedic Doctor, who talked about menstruation in-depth and discussed the common misconceptions of the topic. It was an enlightening discourse. Girls who recently completed their sill training were felicitated and awarded certificates by Neetu Singh, Aarti Saxena, and Agua.

The movies were followed by an open discussion where the young girls shared their dreams with the audience. An eventful day ended on a high note with inspiring words from our friends Agua and Ceci. Our next movie screening will be held on 20th March, Monday, at 7:00 P.M. at Rishikesh Sadan. We are showing Home, a 2009 French documentary film by Yann Arthus-Bertrand. The film is almost entirely composed of aerial shots of various places on Earth. It shows the diversity of life on Earth and how humanity is threatening the ecological balance of the planet. 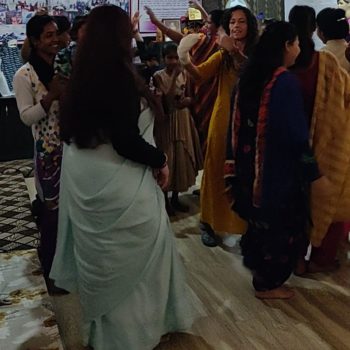